AAIA’s 2nd Annual Sports Day was an epic event of sportsmanship, teamwork, and athleticism as students, teachers, and parents participated in a variety of engaging competitions including tug of war, and five-legged race. A big part of this year’s success is due to our partnership with NTSU, as not only did all of the events […]

Congratulations to our Class of 2019 for their success in gaining acceptance into several prestigious universities with scholarships. 恭喜AAIA十二年級學生大學申請表現亮眼, 錄取美國及澳洲知名大學, 並有多位學生獲得大學提供之優渥獎學金! http://www.aaia.ntpc.edu.tw/index.php?action=academics&cid=4&nid=217 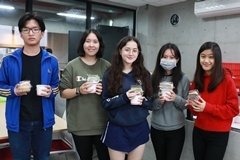 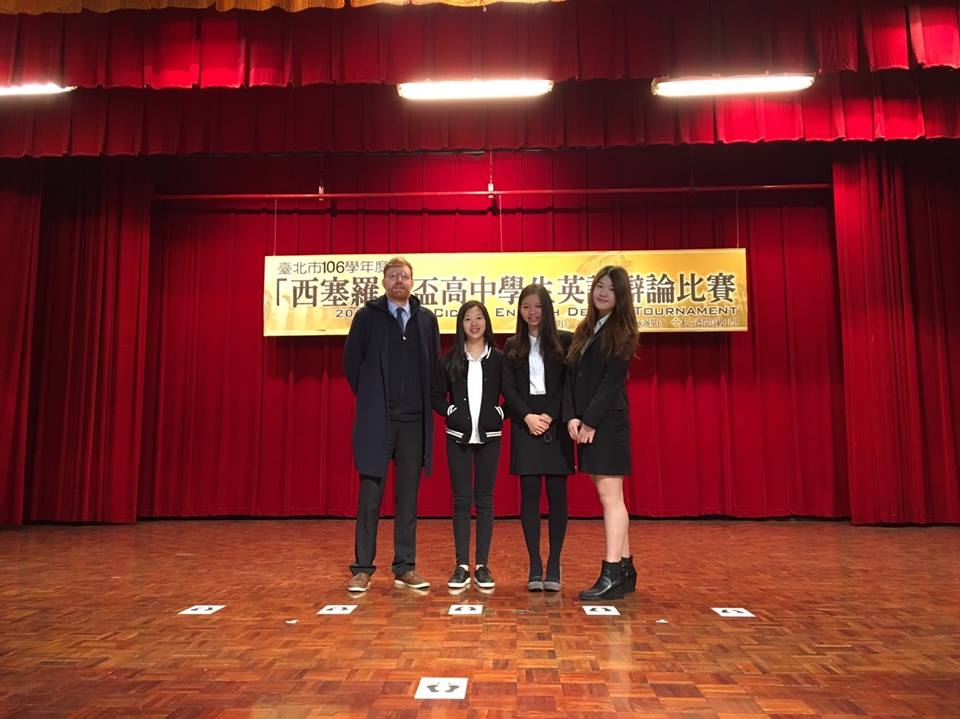 For the second year in a row, AAIA accepted the invitation to compete the CICERO policy debate tournament hosted by the Ministry of Education and WEGO Bilingual High School. The returning team of Winny Peng, Christine Chang, and Patricia Cheng showed commendable improvement in debating the resolution “that the Taiwanese government should legalize the use […] 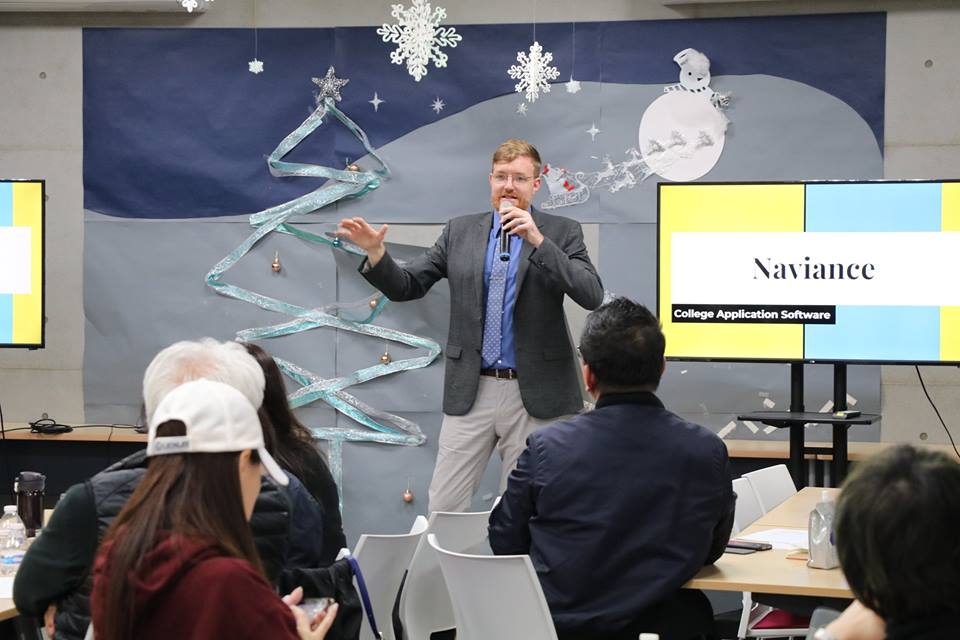 On Wednesday, December 6, the College and Career Readiness department continued its series of evening workshops for students and parents. This installment was focused on the college application process and provided details on each piece of the application package, a timeline for preparation, and general recommendations. Our next CCR workshop will be held on the […] 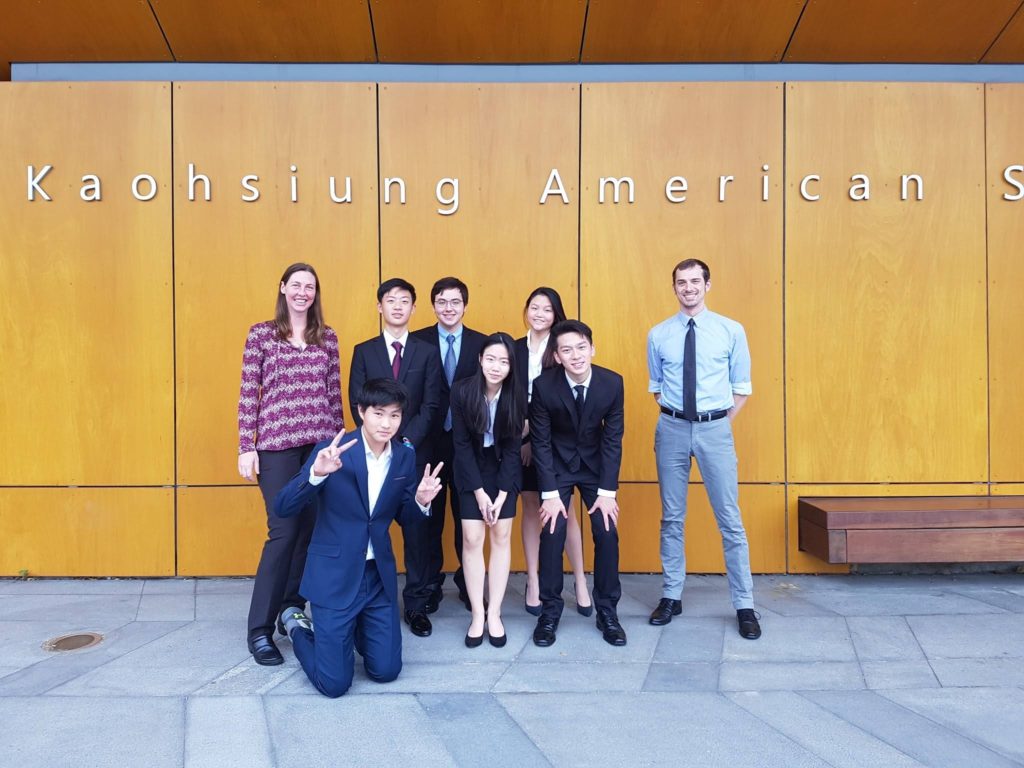 On December 2 and 3, six students traveled to Kaohsiung to participate in Southern Taiwan Model United Nations hosted by Kaohsiung American School. During the two-day conference, the AAIA delegates listened to a keynote speech about Universal Basic Income from writer and blogger Scott Santens and debated on numerous other issues in their committees such […] 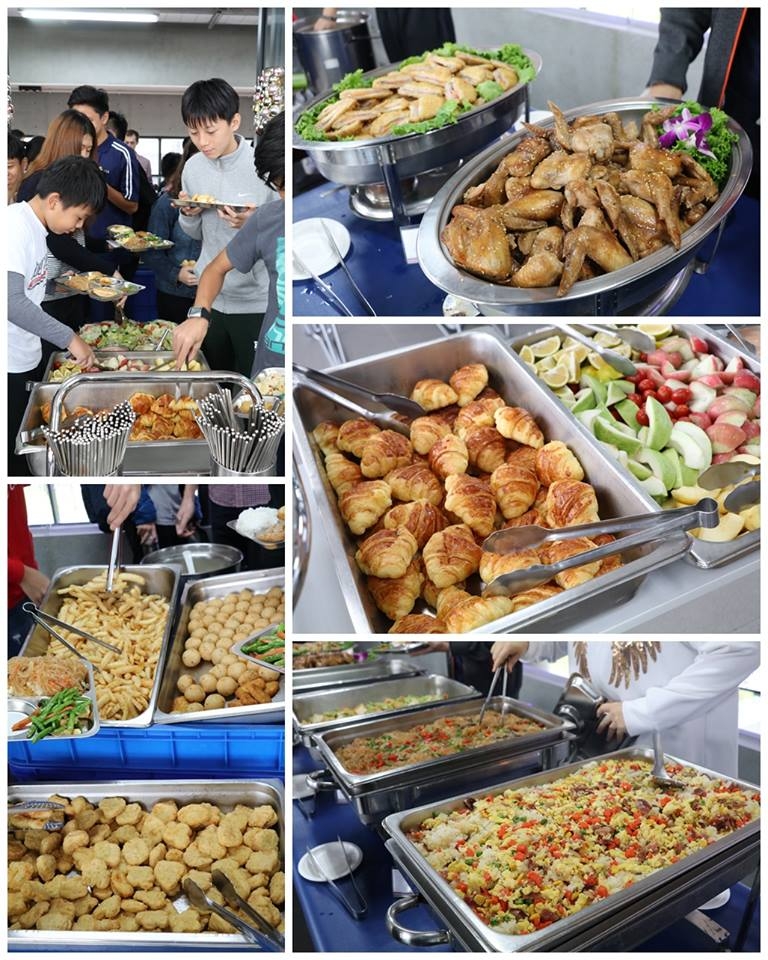 Today was a special lunch where students were treated to delicious American-style snacks, and middle schoolers Henry Chang and Oliver Yeh were presented with awards for their respective achievements in piano and swimming. But the frosting on the cake was December’s birthday celebration sponsored by student council. AAIA學生會今天替十二月生日的同學們準備了美式餐食及蛋糕。另外也恭賀本校Henry Chang跟Oliver Yeh分別在鋼琴及游泳比賽獲得殊榮，並頒發了優良學生獎及圖書禮卷以資鼓勵。 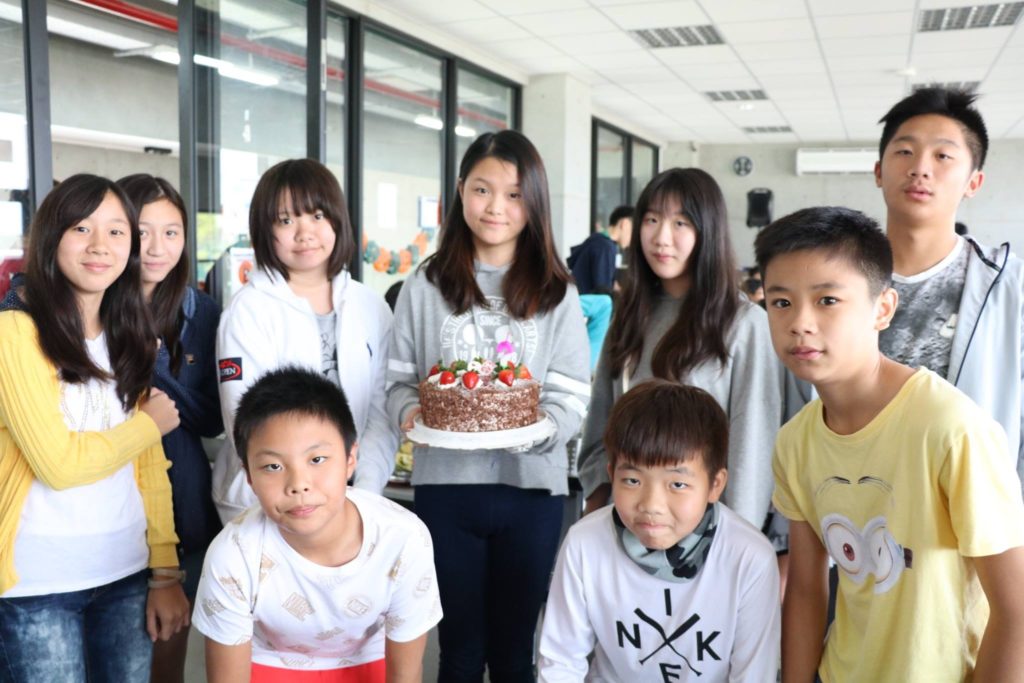 Life is about using the whole box of crayons and making the world your canvas. On AAIA's spirit color-themed Wednesday, we dress to express and celebrate solidarity! Birthday celebrations also took place today. May this month be filled with joy and happiness for all the November borns! 精神週的週三主題為色彩大戰，每個年級的學生必須統一穿著指定顏色的衣服以展現團隊精神與向心力。 AAIA也在今日為所有的十一月壽星們慶生，祝福他們一直健康快樂! 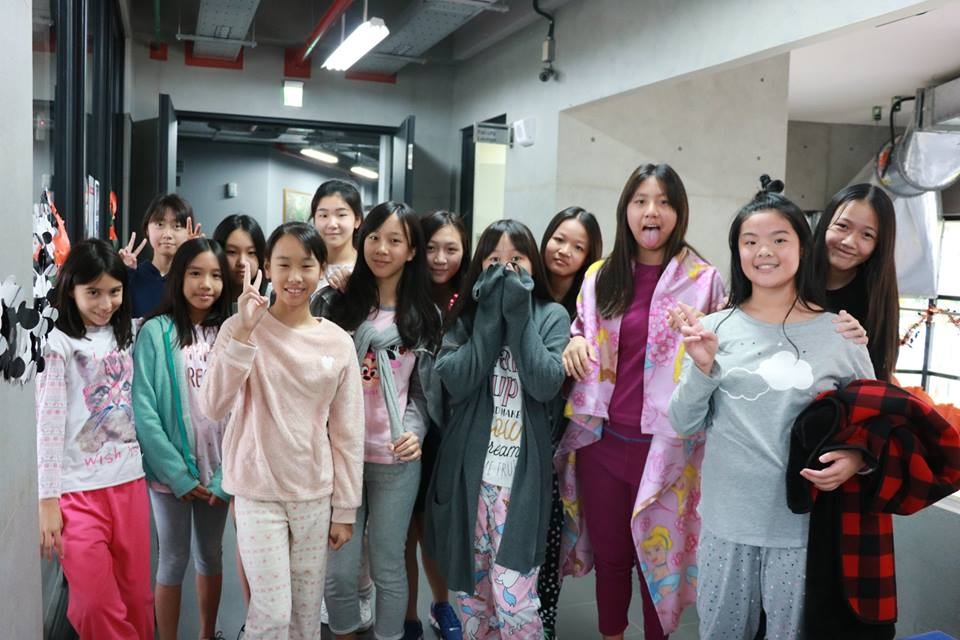 Thanks to our dedicated Student Council's organization, the amount of spirit we possessed with the participation throughout this past week demonstrated superb unity at AAIA! We are grateful for all member's efforts and will continue to foster excellence and flourish as a community! 非常感謝學生會成員們用心的規劃以及全體師生的熱情參與，今年的AAIA精神週成功地展現出了卓越的團隊精神！期許所有AAIA成員今後一起為這個大家庭持續努力！ 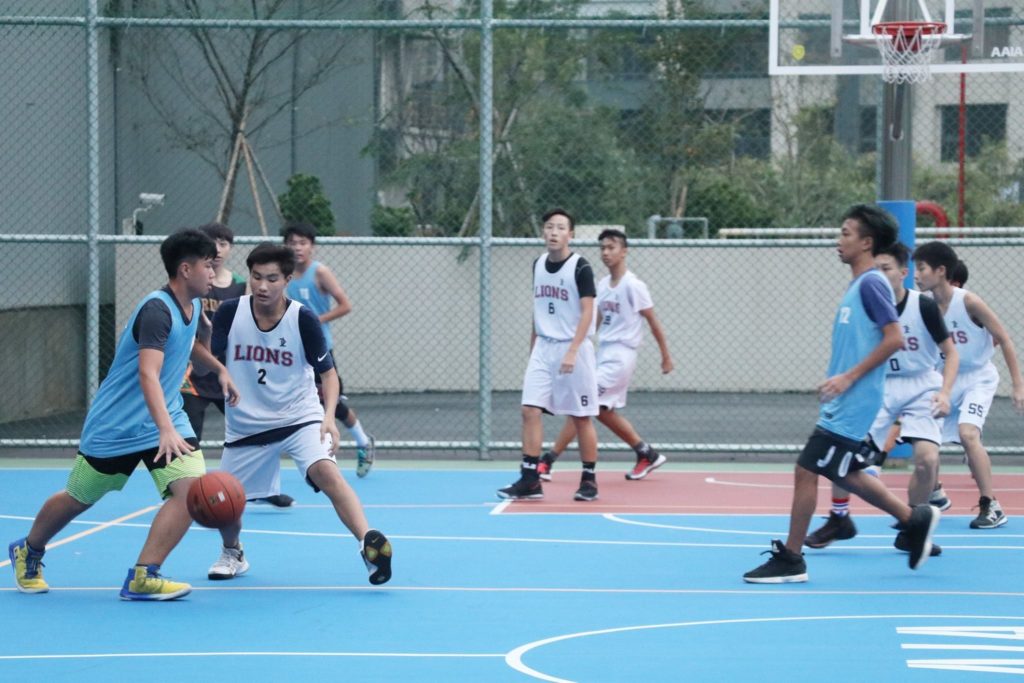 On November 7th, the AAIA basketball team won their second home game of this semester against The Primacy Collegiate Academy (TPCA). It’s been more than one month since the last time they played and all the hard work paid off as the boys displayed better form and teamwork. Stay tuned with our next game against […] 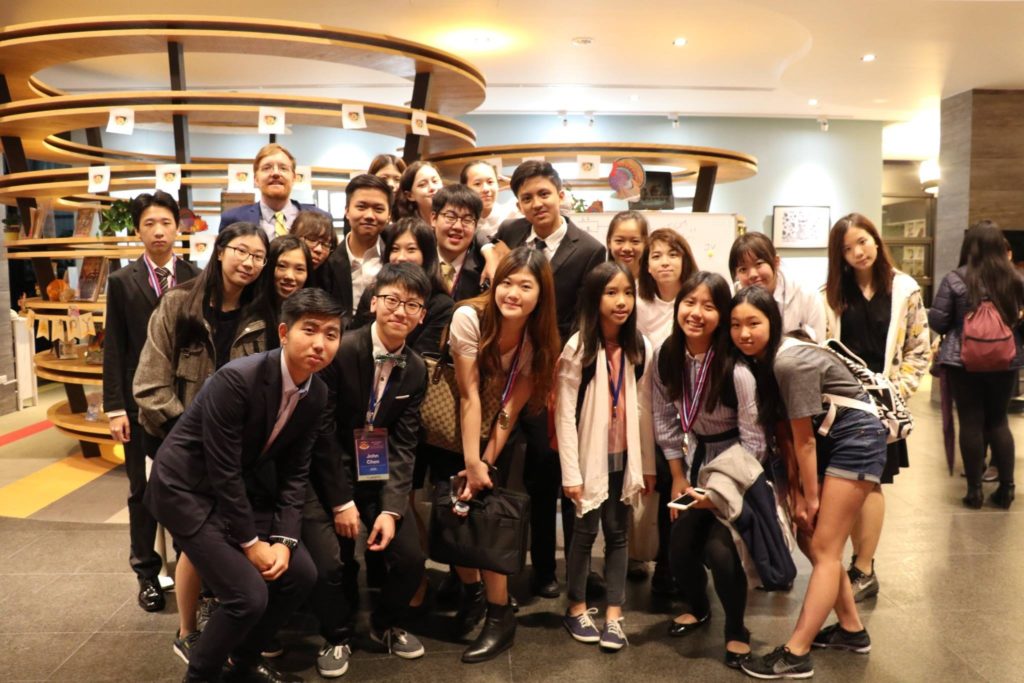 Day 2 of PRIDE began early Saturday morning with three rounds of competitive modified parliamentary debate all connected to this year’s theme of “Originality in the Modern World.” After a scrumptious feast for lunch, all attendees were treated to the finals of the impromptu and duo interpretation speech events while also be treating to hilarious […] 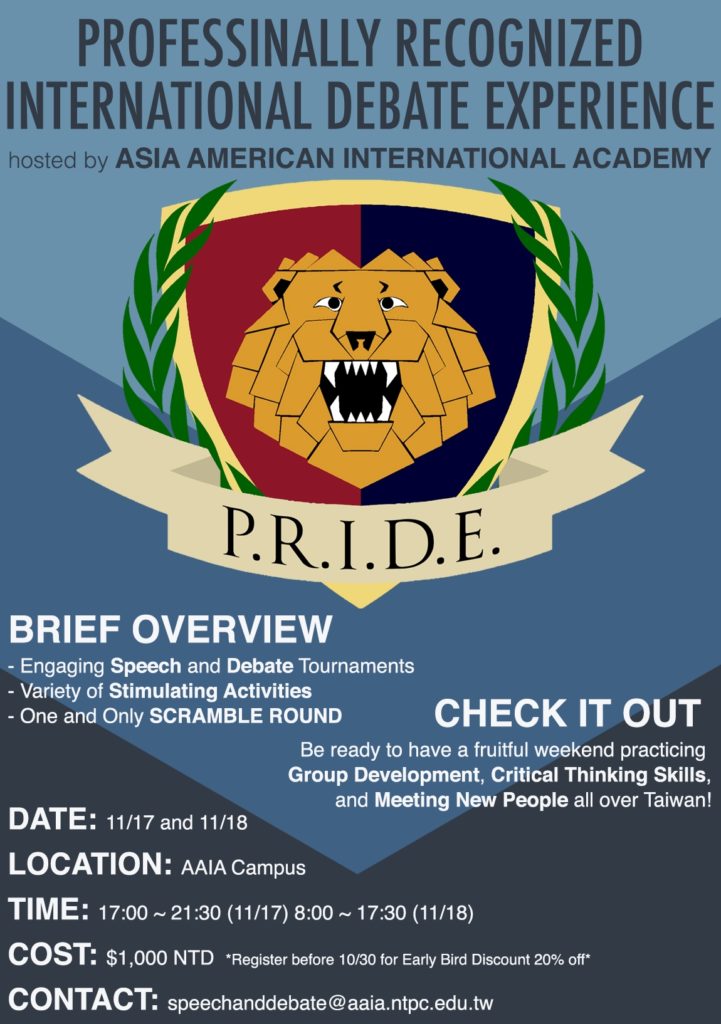